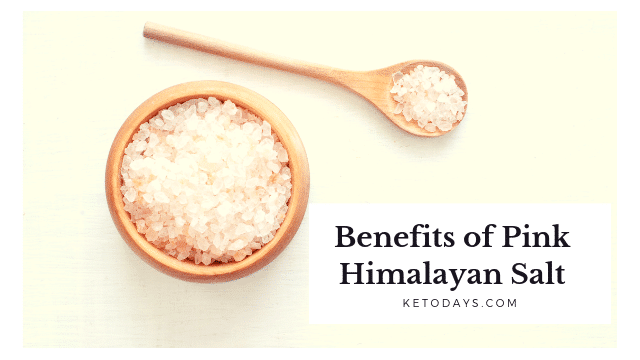 After processing, many foods do not only lose their dietary values but might also become harmful. Pink Himalayan Salt is a natural matter that is collected from the foothills of the Himalayan Mountains.

This salt is also a great substitute in the Keto Diet to the refined table-salt – the white stuff that hides in the shaker near the ingredients in your pantry.

Sodium intake is one thing that can help in preventing the Keto Flu.

Your body utilizes up lots of water to wash off excess sodium in the body, which might lead to dehydration. If one gets dehydrated enough, you can develop headaches, constipation, dizziness or even kidney stones.

However, all this can be avoided with the Himalayan salt which is about 85 percent sodium chloride and the other 15 percent being calcium, magnesium, potassium, and bicarbonate. The ketogenic diet eradicates carbohydrate-rich foods, substituting them with food rich in proteins and fats.

The deficiency of carbohydrates compels the body to burn fat for energy, changing some to ketones, which fuel the brain. The cut down is commonly put into practice by health-care experts to alleviate the incidence of epileptic attacks in patients and people who want lose weight.

Ensuring pink Himalayan Salt intake is enough during a ketogenic diet may help reduce harmful effects in your body.

There are lots of benefits in the pink Himalayan salt which is also known as HPS (Himalayan Pink Salt) over its shop-purchased counterpart.

Does the Body Need Salt?

Salt has for a long time been a prized substance for thousands of years by all continents and cultures. Over the last few decades, surplus sodium and salt intake have been held liable for a plethora of severe health conditions that plague the whole world, such as hypertension, stroke and heart disease.

The reason why the body requires salt is that each cell contains great amounts of salt and it is the generic name for “ions” – charged particles – and nearly all of the cells in the human body, in reality, all of the cells in our bodies, are electrical. In other terms, they drive these ions from one section of their cell membrane, which is an oily or lipid substance and hence an insulator.

They impel ions from one part of that membrane to the other, and that implies there is an electrical potential difference over the layer of the cell and this signifies that this incline – the electrical difference – can be employed by the cell to do other kinds of work.

Therefore cells, for example, posses’ channels via which sodium can gush into the cell, and it comes down its potential difference in a concentration gradient, and the consequence is that it can be employed to pull in glucose simultaneously. Hence sugars can enter the cells.

Therefore we require salts in the body, and those salts include important minerals such as calcium to make the bones strong however we also lose salts all the time we visit the toilet, for instance, we lose phosphates and calcium.

How is pink salt different?

The pink colors in the rocks stem from iron oxide deposits or rust in the mountains. It is bragged about as having health advantages as the purest salt on the planet.

As with all types of salt, the Himalayan rock salt is most generally used for cooking. However, apart from enhancing food flavor, the pink salt assists increase energy, improve adrenal function and relieve migraines.

As mentioned above, unprocessed salt contains several other trace minerals that are needed for health. Things like calcium, magnesium, and iodine are just a few of these examples.

Perhaps this is why new studies suggest consuming too little salt is a greater risk to health. So, when you are eating unprocessed foodstuffs, you are adding tiny amounts of unprocessed salt to your diet without risking your health. In its place, natural salt offers your body with some minerals fundamental to organ function.

The main thing when it comes to nutritional salt is that your source matters. Numerous manufacturers of table salt chemically create and strip essential minerals out of the final product.

Owing to this processed salt is deemed as unhealthy. Salt obtained from natural sources includes several trace elements essential to our health. This implies salt from nature is better for our health.

I’m not a big meat eater. I have to be very purposeful about my protein. I eat meat, nuts, and dairy. I also do a shake now every day that includes protein and collagen peptides.

What are the benefits of pink salt?

With the delicate pink, rose-like shade, the Himalayan salt is visually unique and prized for its alleged dietary profile as it comes with a high number of necessary minerals. Himalayan pink salt has been used to assist in detoxifying the body as a kind of a brine treatment.

Most frequently conducted in the form of a shower, brine baths assert to detoxify your body via osmosis. As the sodium combines the water to the outer skin layer moisture is preserved. Toxins are discharged from the body, while the skin soaks ups the healthy minerals from sodium into the body.

It is suggested that the brine bath is done as close as probable to standard body temperature that is approximately 97 degrees Fahrenheit and that for 26 to 32 gallons of water 2.2 lbs of Himalayan salt should be used.

As a natural sodium source, Himalayan salt offers a vital mineral for healthy bodily functions. Sodium helps to control the blood volume and consequently blood pressure, on top of helping out to control heart functions and muscle contractions. Sodium is naturally found in several foods; however, it can also be eaten as added salt, like the case of the pink Himalayan salt.

The daily suggested amount of sodium to be consumed is between 1500 mg to 2300 mg, for women and men between the age groups of 9 and 50. Some Ketoans digest as much as  3500 mg on their ketogenic diet.

Pink salt is widely hyped for its mineral content, comprising a total of 84 minerals. Besides sodium, the pink Himalayan salt is somewhat high in magnesium, iron, phosphorus, potassium, chloride, and calcium. It also has traces of fluoride, iodine, boron, selenium, copper, and zinc all of which are essential for physical health.

As it occurs naturally, pink salt has all these minerals with no refinement or chemical processing. Because it is naturally harvested, the benefits of the Himalayan salt are available in spite of what form the salt is eaten as. Pink salt is most generally found as fine grains, coarse grains or in large blocks which can be employed as serving platters that precisely “season” your food.

Is Himalayan salt good for you?

At the outset, what makes Himalayan pink salt so remarkable? Approximately 200 million years ago, the Earth had many crystallized sea salt beds that were covered with lava. Since this salt was afterward enveloped in ice and snow for millennia, it was sheltered from present-day pollution and conserved in an intact, pristine atmosphere.

Through the years, salt has become linked and demonized to some chronic ailments. However, it is not that the salt is that bad; it is what people do to it that roots all these harms! In its pure form salt contains minerals that are necessary to health.

However, natural salt, for example, pink Himalayan salt, has nothing to do with the processed cooking and table salt that has had such a bad reputation—and for good rationale! You can consume Himalayan salt without disquieting about distracting your fluid balance or worsening high blood pressure.

Himalayan salt has the same 84 trace elements and minerals that are found in our bodies, some of which include sodium chloride, calcium, magnesium, and potassium. When ingesting this salt, you are in fact receiving less sodium intake in every serving than in regular table salt since it is less processed and the pieces are larger.

Hence Himalayan salt has a less sodium level per serving as the flakes or crystals take up less room than the extremely refined variety of table salt.

Another important factor about this salt is that owing to its matchless cellular structure; it amasses vibrational energy. The minerals contained in this salt exist in a colloidal form, which implies that they are tiny enough for the cells to absorb effortlessly. Due to the pristine environment that the Himalayan salt has been stored in, it is classified among the purest salt available in our days.

Just ensure when you buy the salt, there are no added colors or ingredients. As you are perhaps already aware, various minerals have diverse chemical components- all minerals are made up of a mixture of ions.

What makes Himalayan pink salt nutrition facts so attractive is that since it contains 84 different minerals that are naturally-occurring, a lot of which are necessary for maintaining the best possible health.

Now that you are aware of the truth about the topic is that lots of individual’s perception of salt are completely mistaken. Salt (in the right form) is not only good for you; however, it is, in fact, essential for the body to function correctly. From the Himalayan salt nutrition facts, it is pure- free from pollutants and made up of 84 minerals that naturally occur in the human body.

When water and original Himalayan Crystal Stones for the Sole mix, the two individual ions of chloride and sodium, plus the extra ions from the other 82 minerals found in the salts’ crystalline structure, are freed into the water creating a solution of rigorous mineral energy.

When Sole is added to about 8 ounces of water and drank these electrical charges – or ions are straight away absorbed, charging the body with energy.

The Sole as well enhances the 8 ounces structure of water that is added to it. Therefore, when you consume that water, the body absorbs up to twice the amount of water into your body cells. Akin to everything else in life quality is regularly more imperative than quantity – and when it comes to water, it should not be different.

Salt is regarded as an indispensable constituent of good health, and it has in the past been an important component of human civilization. True salt has numerous trace elements and minerals that are fundamental to a healthy functioning body.

Dejectedly, the white matter in most individual salt shakers has been refined into something rather different. Regardless of all of these health hazards of sodium chloride, you still benefit from natural salt in your diet. Consumed in control, it ought to be a great source of trace minerals that are essential to a well-working body.

However, because the human race has contaminated the oceans to the extent that there is some apprehension about pollutants, the healthiest type of salt shuns this subject completely. This is because it was laid down many millions of years ago while the oceans were uncontaminated by man.